Cheap shale gas has fed an investment boom in products that often end up as waste. Has the petrochemicals industry miscalculated?

Along the banks of the Ohio River in Beaver County, Pennsylvania, giant cranes whir overhead as thousands of construction workers toil away at what will be one of the largest plastic factories in the world. Once complete, the citadel of smokestacks and pipeworks will churn out 1.6m tonnes a year of pellets for manufacturers in a wide range of industries. They will then make things such as shrink wrap, shampoo bottles and garden furniture which remain popular products in spite of an environmental backlash against plastic.  The multibillion-dollar Royal Dutch Shell plant, on the site of an old zinc smelter in the American rust-belt, is the biggest investment in the state since the second world war and further evidence of a hydrocarbon-based manufacturing revival in the US. “We’re taking shale gas from the Marcellus and Utica fields [in north-east US],” says Hilary Mercer, the executive in charge of the development. “Then we’re converting it, first from ethane into ethylene, then into polyethylene.” Donald Trump, US president, visits the Shell Pennsylvania Petrochemicals Complex, which when completed will be one of the largest plastics factories in the world © Reuters The Ohio River complex is one of many hotspots in a 21st century plastics boom, even as consumers across the western world turn against the material. Over the past decade, an unprecedented wave of expenditure — at least $200bn, according to the American Chemistry Council — has been pledged by companies including ExxonMobil, Dow and BP for new chemical production facilities like Shell’s to take advantage of the shale rush in North America. These rock formations have gifted not just cheap natural gas, but also the raw materials for petrochemicals: the basic building blocks of products like paints, adhesives, dyes, detergents, fertilisers and, of course, plastics. 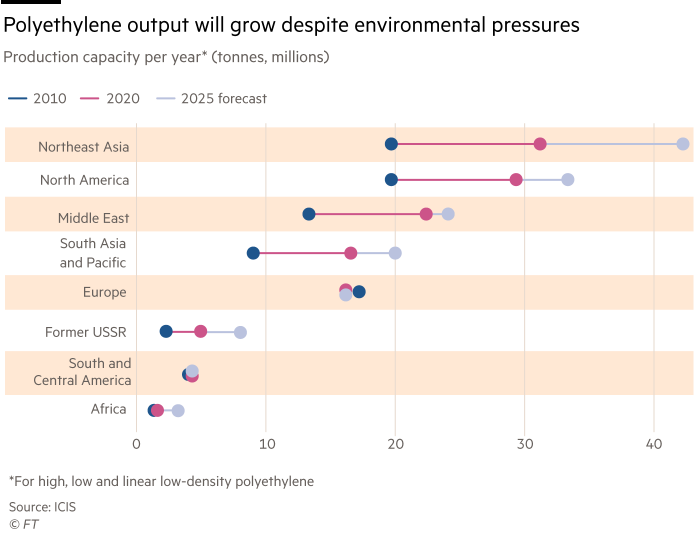 At a time when the oil industry is gripped by fears that demand for petrol will collapse in an era of electric vehicles, many hydrocarbon producers are betting on petrochemicals — and in particular, plastics — to fill the gap. But doubts are emerging about the wisdom of a huge expansion in capacity that will leave the world awash in products that can take hundreds of years to decay.  Images of oceans and rivers clogged up with discarded single-use plastic have raised public awareness about the impact on the environment and human health. This poses a conundrum for producers chasing maximum sales of a versatile substance for which the main ingredient is cheap and abundant. Unless it is seen to respond to these concerns, the industry risks falling foul of public opinion, changes in investor strategy or government clampdowns. Authorities from Brussels to Beijing are already imposing bans on disposable plastic items. “Plastics is the most egregious example of a gap between what the industry is expecting and what society demands,” says Kingsmill Bond, energy strategist at Carbon Tracker, a think-tank. “The risk to investors is that [plastics companies] are building for demand that may not come.” At the same time as the supply splurge, trade tensions and a weak global economy have contributed to a slump in prices for many plastic grades, squeezing profits at petrochemical producers. Campaigners fear this could hold back industry efforts to take greater responsibility for plastic waste and develop eco-friendly substitutes. Prices for high-density polyethylene, one of the biggest selling plastics, recently fell to their lowest levels in a decade in the US and China and for five years in Europe, according to ICIS, a market information service. “You have lower than expected growth, this big capacity increase and trade wars. On top of that you have the drip-drip of the plastic rubbish crisis. That’s hitting polyethylene, because most of it goes for single-use throwaway applications like plastic film, bottles and pouches,” says John Richardson, a senior consultant for Asia at ICIS.  A fracking station in Texas. The shale boom in North America has provided the raw materials for petrochemicals © Bloomberg When the shale revolution took off in North America more than a decade ago, it promised a plentiful and cheap source of oil and gas that would rival Middle Eastern producers and put the US on a course towards energy independence. Just as profound was its impact on the country’s petrochemicals industry. The shale extraction method of hydraulic fracturing, or fracking, generates byproducts known as natural gas liquids, among them ethane and propane. Around the US Gulf Coast new crackers, facilities where ethane and propane are broken down into smaller molecules, have sprung up. 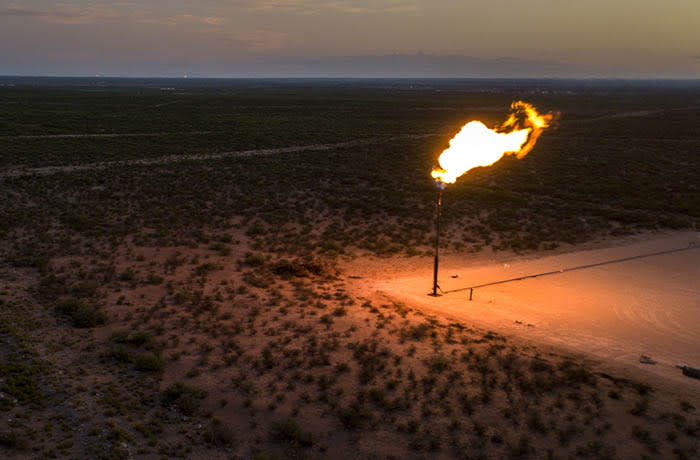